Initial findings from a farm trial in Lincolnshire suggest there may be scope to irrigate potatoes with slightly saline (brackish) water without compromising yield or quality ...

An AHDB-funded Innovative Farmers (IF) project was set up last January after members of the Nene Potatoes grower group in the Holbeach Marsh area wanted more information about using brackish water to help alleviate pressure on limited freshwater supplies for irrigation.

In parts of South Lincolnshire, the only available irrigation water is from ditches which is slightly saline, even in winter, given the low-lying nature of the land. As sea levels rise, salinity poses an increasing risk to freshwater supplies in areas like this, which makes it doubly important to understand how brackish water affects potatoes along with any lasting effects it may have on soil.

“We know that applying saline water overhead can cause leaf scorch and impact on yields, but very little research has been done in the UK,” says the University of Lincoln’s Dr Iain Gould, who was research lead on the project alongside technical specialists, including Dr John Keer of Richard Austin Agriculture.

“We also know that salt accumulation in soils can cause structural damage over time. But most research into the effects of salinity has been conducted in arid countries where salt accumulates more readily, so we need to see if the UK’s higher rainfall has more of a ‘flushing effect’ that overcomes this,” adds Iain. 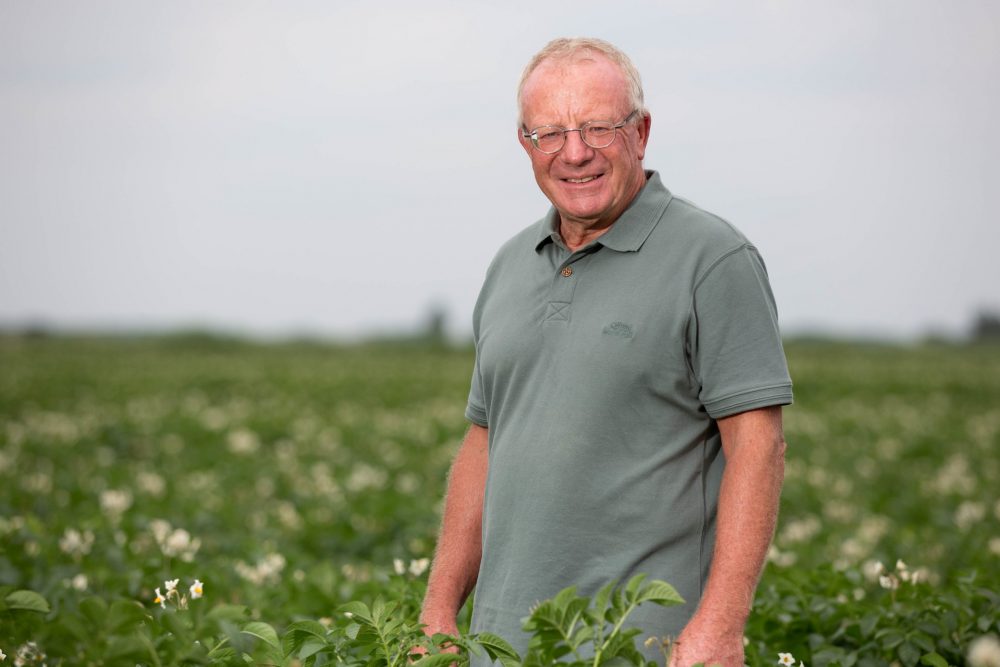 The IF Field Lab trial was hosted by GH Hoyles in South Lincolnshire on silty loam land that sits around 2m below sea level. Water of three different salinity contents was applied to replicated plots of Maris Piper, using a conventional drip irrigation system to avoid scorching the canopy.

Salt contents ranged from 950ppm in the ‘low’ salinity water, representative of the farm’s reservoir, through to 2000ppm in the mid-range, and 4000ppm in the highest salinity treatment. For comparison, tap water is around 380ppm, while seawater is nearer 35,000ppm.

Additionally, other plots received the low salinity water through an overhead irrigation system and there were also unirrigated plots for comparison. Around 80mm of water was applied to the potato crop over the season.

Overall, the use of brackish water up to 4000ppm salinity had no significant effect on haulm vigour, yield or quality of potatoes grown in the trials last season, indicating that it could be a potential to supplement irrigation supplies in future seasons.

“The past five years have seen some really dry winters where people haven’t been able to fill reservoirs with good quality freshwater. These findings give us the confidence to top up reservoirs with slightly salty water without compromising scab control, yield or quality,” he says.

In the Field Lab, common scab was controlled well in all the irrigated plots, with typically less than 3% of tuber surface area affected, compared with nearer 6% in the non-irrigated plots. There was no significant difference in black dot incidence or in skin brightness across the treatments.

But Iain points out there were periods of heavy rain during the 2020 growing season which could have influenced results. There were also signs of reduced infiltration and slight compaction at depth (at around 35cm) in the higher salinity plots, although further soil assessments are planned this spring to determine if this is a lasting structural impact that needs rectifying with deep subsoiling or other measures.

More work is also needed to determine the longer-term impacts on soil microbiology as slight differences in soil respiration (an indication of soil biological activity) were observed between the low salinity overhead irrigation and the lowest salinity drip treatments.

John is keen to repeat the work in future seasons, potentially including water of even higher salinity applied through both drip and overhead systems to gauge the effect on crop growth and soil structure.

It would also be worth repeating the work in drier years where more irrigation water is required, to give a clearer picture for those considering changing practice, he believes.

“The salinity of soil water can affect the physical properties of soil by causing dispersion of soil aggregates, potentially resulting in reduced infiltration and tighter/compacted soil. Soils with weaker natural structure and fine particles are therefore at greater risk of developing salt-related structural issues,” he explains.

Heavy clays tend to have a more resilient structure and higher cation exchange capacity (CEC), which gives more buffering capacity to any increases in salt content. However they are more prone to structural damage than free-draining sandy soils, which let salts wash through the profile more easily so prevents any long-term build up, he explains.

“The silty loam soil, where last season’s trial was set up, was probably the highest risk scenario from a structural damage point of view. But it will be interesting to see if there’s any lasting effect given that our winter rainfall should have a significant flushing effect.”

Iain says increasing organic matter could help buffer soils against salinity by increasing the soil’s CEC and by improving its structure, which in turn allows better natural drainage and increases the chances of salts washing out of the soil.

Ross, who advises on over 500ha of potatoes across Shropshire, Staffordshire, Cheshire and North Wales, sees Soleto (metobromuron) and metribuzin as his key ‘go to’ residual herbicides, with the relative newcomer Emerger (aclonifen) proving to be an effective partner for fields with very high weed burdens.

“After analysing the weed spectrum, soil type and the variety being grown there is rarely a standard programme to cover all situations. The key is to utilise all the actives at your disposal and put crop safety and flexibility at the forefront of programmes. In Soleto and Emerger there are now two pre-emergence options that offer effective solutions. Both have no soil type or varietal restrictions so building programmes around them is a good starting point.

“Soleto is very active in soil and is an excellent partner to other actives, such as metribuzin and prosulfocarb. Emerger is also an effective tank-mix partner offering additional control of polygonum weeds in tough situations,” he comments.

Looking back to the dry spring last year, Ross believes that applying residual herbicides early and at high dose rates before a contact herbicide is applied is important when dealing with some of the unusual weather patterns the UK has experienced in recent years.

“With the potential for sudden and extreme weather fluctuations I advise getting residuals on as early as possible – normally 7-10 days after planting. Then wait as late as possible before applying a contact herbicide as a separate spray just before the ridges crack. Separating the two enables better overall risk management,” he believes.

“The combination of Soleto and metribuzin worked extremely well in last year’s dry conditions, but the varietal restrictions that come with metribuzin can be an issue and I wouldn’t advise using it on coarse, sandy soils to avoid the potential for crop damage,” he adds.

Ross sees Gozai (pyraflufen-ethyl) as a solid choice for a contact herbicide – applied on its own at 0.4 l/ha, in no less than 200 l/ha of water with the addition of a methylated seed oil (MSO) to optimise results.

“If Gozai is applied at the right coverage levels with an MSO then there should be no requirement for a follow up, such as rimsulfuron, in over 80% of cases based on the extensive work I did with the active during 2019 and 2020,” he comments.

Metribuzin has been a staple of potato weed control programmes and covers a broad spectrum of weeds. Scottish Agronony’s Eric Anderson says that achieving good weed control in situations where metribuzin can’t be applied can be difficult and will almost certainly be more expensive.

Although there’s some regulatory uncertainty hanging over metribuzin, the main concern is with variety sensitivity. While data on variety sensitivity is available, the role of soil texture in influencing its performance leaves some people apprehensive about its use, says Eric.

“Metribuzin tolerance, or lack of it, is often the first consideration when formulating a weed control programme. Without it, control is still achievable but is often more complex and potentially costly.”

The loss of diquat ahead of the 2020 season forced a change in pre-em tactics. Eric explains that one of the issues was which contact herbicide to use – both carfentrazone-ethyl and pyraflufen-ethyl have limitations and product choices at the pre-em timing may also affect desiccation options later in the season.

“Some growers were unprepared for the necessity to bring herbicide applications forward. The first residual herbicide has to be made 7-10 days after planting – typically once ridges are settled. This can be sequenced with contact sprays, such as Gozai or Shark (carfentrazone-ethyl), which are restricted to no more than 10% crop emerged. Any later and crop growth will be seriously checked.”

One consequence of this is to increase the pressure on the residual component of the herbicide programme, making it important to make the right herbicide choices. “The central issue is the weed spectrum to be controlled. Failure to understand the weeds present in the field will result in higher costs in the long-term,” says Eric.

“On high organic matter skirt or fenland soils where the variety is approved for metribuzin, then it’s a no-brainer. Metribuzin has a wide spectrum of activity including annual meadowgrass and many broadleaf weeds, so it should be incorporated into the top 10-15 cm of soil during the final cultivation with the rotary tiller (on this soil type).

Soil moisture status is another consideration, he highlights. Emerger is a diphenyl-ether, which is taken up by the hypocotyls, cotyledons and coleoptiles of weeds. It’s then translocated to the meristems causing bleaching and chlorosis of young shoot tissue as it develops. As such, it’s less affected by dry soils than Defy (prosulfocarb) and this may influence application timing.

“Defy needs to go on later, typically as late as you dare and often as a standalone application. This has obvious cost implications and weed control in potatoes is already twice as expensive as it was two years ago,” he adds.

In some situation Praxim (metobromuron) has a place in the programme but it may be more niche, believes Eric. “Emerger has the wider weed spectrum and is more cost effective, with better activity against fat hen, black-bindweed and common field-speedwell, but both will require the addition of Defy (prosulfocarb) to bolster control of cleavers.”